skip to main | skip to sidebar

Episode 59 of That's Good to Know 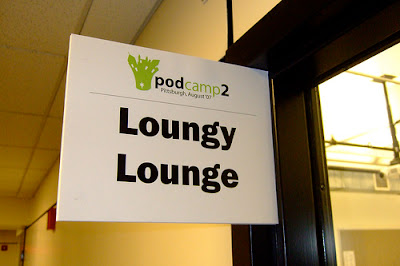 Dave, Rob and I go over the news of the news blog. Comedy4cast goes on hiadus in podcast news, and I try really hard not to geek out during my interviews with Chris Brogan and Justine from podcamp. Dave and Rob Pink Floyd's the Wall, and Bourne Ultimatum. I try to find out if anyone is intrested in Rush Hour 3..........and podcamp gets a plug.

If one comes to your town, or one close by, go to podcamp. You reading this and listening to our show, you have some intrest, maybe someday you will do this on your own, and we can podlight your show. Check it out, its free and a lot of fun.
And you could end up on flickr like me.....yeah thats me in the front row, or on Justinetv, like me......embarrasing but me again, or on bliptv...I think. 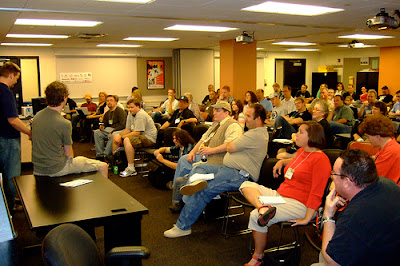 Talk to us and see what we are up to on Twitter.
Posted by Chris Thorn co-host of That's Good to Know at 9:09 PM 1 comment:

Podcamp is one of those things you have to want to get something out of. You can go and just absorb information at all the sessions and not say a word and probably get out what you need if you want the basics. That is what I did most of last year at podcamp, I can sat back and took it all in. This year I gave more of an effort to participate, ask question, join in the fun. I got myself involved in a presentation for a fake web 2.0 company called RandomEarth, which one Alex Landefeld of minute lit, and the pixel core, and myself a cool Rita's Italian Ice shirt, air freshener and a Guru sponsored Thermos during a session called Half-Baked.com hosted by Jia Ji of Guru.com and judged by John Carman of the M Show and Lindsay Patross of Spreadshirt.com and Iheartpgh.com.
.

Next came the Wrestling Mayhem and the Should I Drink That. Their session went over how their shows started, what they did to get and keep their listeners and couple WOOOOOO chops to the chest. I also got to sign the YOU TUBE. 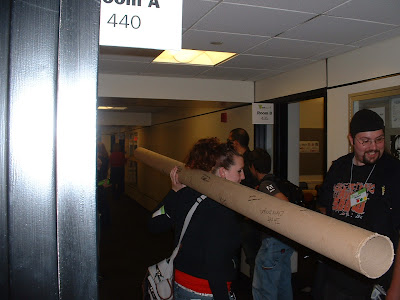 Next was the Chris Brogan "Let's MAKE something" session. All I have to say is, please keep listening to our show, even after watching this video, and the first clip was not meant to be left on, so ignore it.

That was all in day one. Day 2 was more learning in the beginning and craziness in the second half. The first session was with Chris Brogan talking about differentiating us from our shows. Think of yourself as someone who does these things (work, podcast), don't let yourself be it or have people think of you as the show or as your job title at work. That lead to a session by Melissa of My Design Self Study who did an informative talk on Branding which can be downloaded from her site. She talked about choosing you content, your audience and use that to pick the right logo and look for your content. Combining those things will help you brand your content correctly and help you attract the right audience.

Next was Show Me the Money...Please with Jason Cable of the GLBT podcast and Cynthis Closkey of My Brilliant Mistakes. They went over lots of different ways with some ideas from the audience on how to make money through the use of ads (Google, Pay Per Post, Review Me, Fire Lead, and Deep Local which will be up and running near the end of 2007) on their blogs or websites. They also discussed the Amazon affiliate program that seemed very simple to set up and depending on your viewers could get you a few bucks here and there.

Then came lunch. Lunch was supposed to be the time I interviewed Chris Brogan, oh and ate lunch. Instead it became video watching, eating, giveaway time. (speaking of the giveaways, if you were there, what was the name of the second book they gave away, I want to pick it up, actually both but the second one sounded like an interesting read) We watched some very interesting videos like.....

*if you love your iphone, in a, if it gets scratched my life is over sort of way...don't watch this.

Here is something to laugh at while you wipe your tears away from the last one...


And here is a trailer that was shown from a movie made by students of the Art Institute, for a $1,000. The movie, not the trailer...smart ass

and just for the 2 of you who have not seen this...Dave and Rob I mean you, here is Justine and her phone bill.

The afternoon started with my interview with Chris Brogan, which you can here on the next episode of That's Good to Know. That interview lead to one with Justine, which can be seen if you want to see me online, at justin.tv/justine 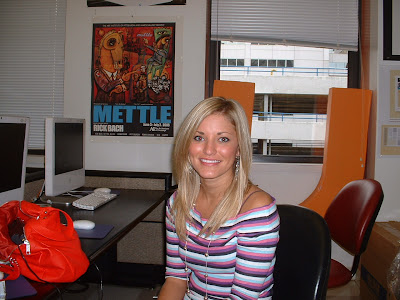 After that the day ended with a panel hosted by Justin Kownacki which discussed the future of new social media in Pittsburgh from new media creators and even Bill Peduto of Pittsburgh's City Council came by.

At the end of the day all I wanted was the next podcamp or bootcamp to be announced and for it to be next week and to rid the world of bacn (somewhere between spam and the mail you want, like friend requests and wiki updates, you want it but you don't, its coming for you.). I learned alot this year about blogging, branding and monetizing your site/blog. I met some new people and saw some people I met last year and I saw alot of new faces that I know will be back next year to talk about the blog or podcast they started up because of this years podcamp.

Good luck to everyone just starting up, once you get going you will wonder why you didn't start sooner. See you at Podcamp 3.

oh and I will try to bring some coffee with me next year to help out. It all went so fast. 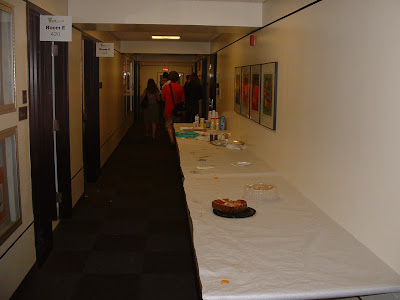 And how could I forget HAPPY BIRTHDAY NORMAN!!!
Posted by Chris Thorn co-host of That's Good to Know at 7:27 PM No comments:

Podcamp moved to the Pittsburgh Art Institute this year. So far the move seems to have worked out very well. Everything is much closer together, there are plenty of rooms to sit back and relax in, shoot video and hopefully tomorrow do some interviews in. If your in the area and have any intrest at all in blogging, podcasting or video podcasting you should come down. If you have no intrest you should come anyway and I promise you will become a blogger or a podcaster by the end of the day.

and if you do decide to come, you don't have to call ahead, unless you want to...

Posted by Chris Thorn co-host of That's Good to Know at 7:43 PM No comments:

Books, Black Sheep and all the other stuff...oh and Episodes 57 and 58 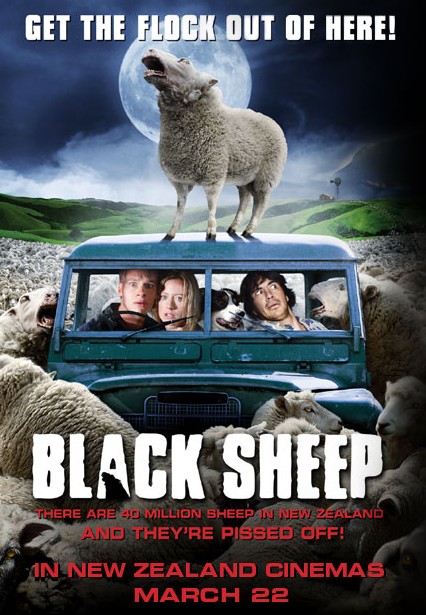 Episodes 57 and 58 have finally arrived. I know 57 was last week, but ...would u believe the dog ate my show notes? 57 was one of those, PREVIOUSLY ON That's Good to Know, kinda moments, with some news and reviews thrown in. This past weeks show had the whole gang back together. Rob even did a review of Black Sheep.....not the one your thinking of. We also did a podlight on this show called the Chris cast....I think its a good show, I mean it has a great name. Next week, the Chris cast will be back, mostly because Dave will be out of town, Rob will be, somewhere else and I will be at podcamp. I am hoping to get some interviews and maybe just do a whole show there. Chris Brogan already said he would be on, and hopefully he won't be the only one.

See you all next week. And if your coming to Podcamp here in Pittsburgh send us an email

Talk to us and see what we are up to on Twitter.
Posted by Chris Thorn co-host of That's Good to Know at 10:41 AM No comments:

Check us out at

This is a Flickr badge showing public photos from That's Good to Know podcast. Make your own badge here.

Link to us on Technorati

Chris Thorn co-host of That's Good to Know
I co-host the podcast That's Good to Know with my two friends Dave and Rob. I also occasionally write for a website affiliated with our show populardistractions.com. I have been intrested in anything web 2.0 and am always looking for ways to get the word out about the show, my blog and some of my future plans, which include a podlight blog and a revamp of my old review blog.